This website is dedicated to my father, Robert M. Sherman, the editor and publisher of Atomic Energy Newsletter.

He passed away on January 9, 1995, just short of his 80th birthday. While cleaning out his closet and home office, I found a dusty cardboard carton containing military service memorabilia and an envelope of old photos. One of the photos shows him standing in parachute harness next to another airman just below the nose of the B-26 Los Lobos Grande. Both he and the other airman look young and confident. Another photo showed him in uniform, smiling with a pipe in his mouth in a small office at a desk with a typewriter. In a second carton I found small boxes of microfilm and hard copy originals of Atomic Energy Newsletter.

He never spoke to us (his children) about the newsletter and forcefully discouraged most questions about his past. In fact, though, the newsletter had been his business, apparently successful enough to support a growing family during its twelve years of publication. It was my mother who mentioned that he had been investigated by the FBI.

Robert M. Sherman was born in 1915 and grew up in Winsted, Connecticut and The Bronx, New York. He attended the Gilbert School in Winsted, where with good gr 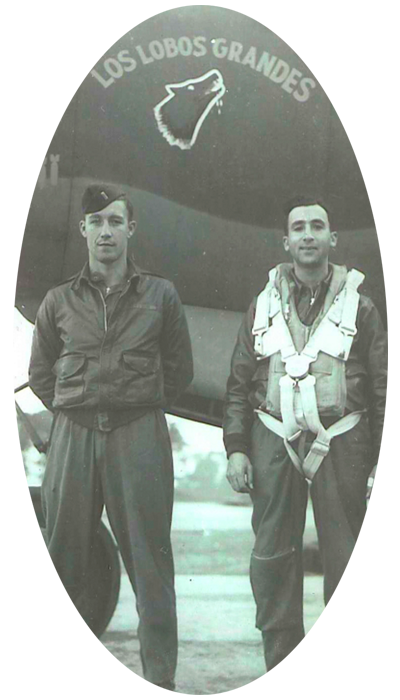 ades you went on to an engineering college and without you got a job in the Gilbert Clock factory.  (There is an endowed chair of electrical engineering at Cooper Union in his older brother Jesse’s name.)

In 1925 his father left the family and his mother moved him, Jesse and younger sister Shirley to her parent’s house in The Bronx.  After graduating from Stuyvesant High School in 1932, Robert entered Brooklyn Polytechnic Institute and a year later followed his brother to Cooper Union, but after two years towards a degree in chemical engineering he quit and took a job in radio manufacturing to help support the family. In February 1942, not cut out for academia and unhappy with his job, he jumped at the chance to enlist in the Army Air Corp. One year later he became a B-26 bombardier/navigator.

At 27 years old he was older than most of his fellow enlistees. He didn’t drink and was relatively serious. Francis Scurr, in the photo standing at ease next to my father beneath the nose of the bomber, remembered that my dad was quiet and kept to himself.

In February 1944 he was transferred to the B-26 1st Pathfinders Squadron (Provisional) as a navigator in one of the original crews. They trained him to use OBOE, a top secret device used in concert with ground guidance to enable highly accurate bombing under all conditions of visibility. Pathfinder ships led squadrons of other bombers to their targets in total overcast. At their base, they and their ships were sequestered under guard to their own small area of the airfield. Otto Kirkpatrick, lead navigator of the 1st Pathfinder Squadron, told me (in his Tennessee drawl), “I don’t remember your daddy, but he must have been very good if he was with the Pathfinders.”

After completing 59 combat missions and receiving the Distinguished Flying Cross and Air Medal with 9 Oak Leaf Clusters, he arrived back in the states in early 1945 and was stationed at Bolling Air Force Base in Washington, D.C. with the 501st Air Transport Command. According to his separation papers, after receiving training as a public relations officer he “Prepared or supervised preparation of news releases, special articles, photographs and other informational material; wrote articles of interest, with due regard to public relations policies and procedures. Wrote articles as ghost writer for the Commanding General, Air Transport Command.”

Air Transport Command was deactivated on June 1, 1948, and on June 17, 1948 Robert reverted to inactive status in the Reserve.  His service separation papers list his permanent mailing address as being the office of J. Henry West in New York City, an attorney involved (as later mentioned in the FBI file) with the start up funding of Atomic Energy Newsletter. Eight months later, on February 14, 1949, Robert mailed out the first newsletter press releases and subscription solicitations.

After stopping the newsletter in 1961, he built a successful real estate business, R.M. Sherman Associates, Inc, first in New York City and then in Florida, that he continued for the rest of his life. (He also financially supported Jesse in retirement; for whatever reason, Jesse had not filed patents in his own name on his many inventions, something that never ceased to irk Robert.) Until I had opened the cardboard cartons, the man I knew was a smart, tough real estate entrepreneur, who played his business cards close to his chest and answered personal questions only with great reluctance. There were hints of another life: I’d been on business trips with him to Florida, where while flying in to Tampa he told me about MacDill Air Force base (where he trained) and “A ship a day in Tampa Bay” (what they used to say about the B-26).  He traded his service .45 for a bottle of French wine. Never a mention of the newsletter, except for some reason he had an extremely high regard for Admiral Hyman Rickover, and he once told me, “Don’t get into trouble with the FBI; they’ll put a man on you who’ll make you his life’s work.”

Why Buy Me a Cup of Coffee?

You get the content for free. There are no ads. The newsletter itself is almost 1,600 pages scanned in OCR quality, giving you, at your fingertips, 12 years of early nuclear age (1949-1961) reporting.

You won’t find this content compiled in total anywhere else.

Assembling this was a labor of love, and it took years, including contacting the Library of Congress and the FBI, filling in missing issues, and finding a professional website developer who shared my vision for presentation (and actually had the skills to match).

It’s been fun, and I’d like to keep it going. If you find the content useful, I’ve saved you time and money. If you find it entertaining, I’m happy about that. In either case, tell others! I’ll probably never recoup my initial costs, but keeping it going still costs money. Which is why I’m asking.